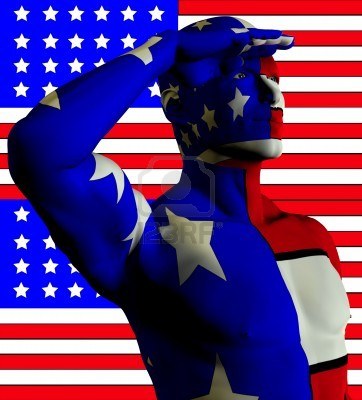 Imagine that the United States of America was a person.  It shouldn’t be too much of a stretch.  Culture is sort of like personality and habit.  Politics is like an individual’s worldview or perspective on things.  Both a nation and a person can become demoralized by internal and external forces.  And, just as a person has a soul, a nation seems to have a deeper core that defines and guides it.  It means something to be an American; it means something to be America.

So you have this image in your head of America, the person.  I would be curious to know what you see.  What is America wearing, if anything, and what posture does he or she have?   Let me tell you what I see.

I see a man who can’t stop looking side to side.  He goes from left to right, and each time he turns his head it puts more strain on his neck as he turns it a little more.  At the same time his eyes are looking down at the ground.  For a brief moment, every now and then, he peeks up at the heavens, but it is only for a moment.  His clothes are very stylish, and very expensive, but in his breast pocket is a notice saying that all of his possessions will soon be repossessed if he doesn’t pay his creditors.  His heart is experiencing palpitations due to the stress of a serious identity crisis.  He was raised a Christian, but has started to doubt its significance now that he is more mature and well off.  His daughter wants to have an abortion and he’s equally torn by his love for her freedom to choose and his love for her unborn child.  His son is gay, and he doesn’t know whether to kick him out of the house or celebrate with a parade.  He carries a small document in his hand that begs him not to forget where he comes from and who he is, but his hand is so clenched around it that he hasn’t read it in years.  This man has seen better days.  But not all hope is lost.

Inside the man is an indomitable spirit.  Despite his identity crisis and crippling debt and all forms of adversity, he carries within him a tested spirit.  A spirit that has passed through many fires.  A spirit that burns brightest when the world seems darkest.  This man has suffered many hardships and come out stronger in the end, and for that reason, for the spirit within that transcends the baggage and the vitriol and the pettiness, he has real hope for a better life ahead.  But as long as he carries the pride of his own self-importance, and refuses to acknowledge the Creator that made him in word and deed, he will continue to be a divided man with a sore neck.

4 thoughts on “If the Nation Were a Person”